Ten Key Logistics and Supply Chain Trends to Watch in 2016

Posted by InnovoTek on Thursday, 04 August 2016 in Supply Chain Logistics 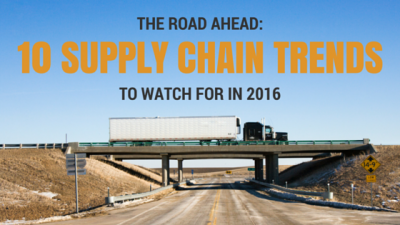 In many ways 2015 was a momentous year for the supply chain and logistics industry in terms of acquisitions and innovations. Prof John Manners-Bell looks ahead to 2016 to see what should be expected…

The United States will drive the global economy in 2016 which will mean that US logistics companies will continue to prosper, both at home and abroad. The stronger dollar that has been evident at the end of 2015 will obsorb in imports from around the world, which will give Asian and European exporters a welcome boost and strengthen transpacific shipping volumes in particular. However, emerging markets have been forced to increase their interest rates which will have a detrimental effect on already struggling economies. China is experiencing a relatively hard landing in terms of falling economic growth, but it will be supported by the growth of the US economy for exports and its e-commerce market has seen staggering growth despite the economic situation. Also helping the global logistics industry will be a recovery in Europe, which is proceeding better than many economists expected.

Although it is notoriously difficult to forecast the price of oil, many analysts expect the present levels to continue for the next six months and then for the price to increase in the second half of the year. Any rises will impact on the profits of carriers – particularly shipping lines – where these increases cannot be passed on to the customer due to over-capacity in the market. Road freight companies should enjoy the low costs whilst they can as they won’t last forever. The rate of the dollar will also be a key influence on oil prices around the world.

2015 saw a number of blockbuster deals take place as the market continued to consolidate. The same market dynamics (e.g. cheap and available money, fragmented markets, ambitious management teams) exist in 2016, and this will result in further consolidation. Also, private equity companies will be pursuing their own agendas in building out new market players. Few companies are too big for acquisition, as evidenced by the acquisitions (or pending acquisitions) of Norbert Dentressangle and TNT. Pressures in the shipping market will create a need for further consolidation amongst shipping lines.

Although natural disasters are impossible to predict, it would seem that some, such as weather events (floods, hurricanes, droughts etc.), are becoming more frequent due to a changing climate. This means that global manufacturers and retailers must implement measures to make their supply chains more resilient. Logistics companies have an increasing role to play in this and strategies can be enhanced by ‘sense and respond’ technology. Supply chains must become more flexible and adaptable if they are to continue to provide competitive advantage in an uncertain 2016.

The global logistics industry will continue to be impacted by new technologies and business models in 2016. Do not expect a revolution in the short term, although autonomous vehicles, 3D printing, sensor technology etc. will continue to influence the way in which the industry evolves. Many logistics companies are still trying to assess what impact disruptive innovations will have upon their businesses. Disruptors, such as Uber, will undoubtedly make moves to shake up the inefficient road freight sector, but more likely to have an immediate impact is the adoption of Uber-like technologies by the incumbent operators.

Although the refugee crisis which gripped Europe in 2015 and which brought so much chaos to many international borders in the region has, for the time being, been largely forgotten by the media, the problems have not gone away. The huge influx of migrants, transiting South East Europe from origins in Syria, East Africa and even Afghanistan, caused many European countries to question the Schengen Agreement (the treaty which allows the free movement of people across mainland European countries). The security situation in Europe (specifically the terrorist atrocities in Paris) also led administrators to questions whether more border controls should be implemented. If politicians believe it is in their national interests to re-impose border checks, on a temporary or even permanent basis, supply chains across the region will be heavily impacted by delays and inventory strategies re-assessed.

The e-retail phenomenon shows no sign of losing momentum, though making money out of it is a different matter. There is no doubt that retailers will have to adopt omni-channel strategies to survive, but they will have to do so in a way that allows them to make money. This will increasingly involve charging customers for deliveries, whilst at the same time providing a wider range of delivery options. Retailers in 2016 will increasingly push customers towards cheaper click-and-collect or locker delivery options. Amazon will continue to vertically integrate its logistics operations, leveraging its huge volumes in order to push down costs whilst at the same time increasing efficiencies through the use of its own assets. In addition to trucks and warehouses, look out for its expansion into air cargo.

Regulatory issues could have a major impact on the movement of international freight in 2016 if confusion over the implementation of the International Maritime Organization’s SOLAS (Safety of Life at Sea) measures are not addressed. This new regulation requires the verification of gross mass of containers prior to loading; and although in theory this is the responsibility of shippers, according to one survey by Inttra Inc, 60% of respondents do not think that they will be ready by the time it is implemented in July 2016. Other changes will impact forwarders in 2016 such as the EU’s Union Customs Code – an initiative to replace and harmonize existing Customs regimes in Europe. Without the proper implementation and awareness of shippers, carriers and freight forwarders, 2016 could be a confusing and difficult year.

Always the million dollar question – what will happen to freight rates this year? Shipping lines have proved unable to reverse the downturn seen in 2015, despite concerted efforts. A combination of over-capacity and stagnating volumes has meant that revenues and profits plunged in the second half of 2015. The increased economies of scale that 18,000+ TEU vessels brought did not make up for their under-utilisation. It is hard to see the economic upturn in 2016 providing sufficient volumes to address this problem on their own – capacity needs to be taken out of the system before there can be a sustained improvement in rates and profitability.

Air cargo rates also look set to remain static. The uncertain economic environment and the glut of capacity on the market (brought about mainly by the introduction of wide bodied passenger aircraft) will depress rates. The good news for air cargo operators is the present low cost of jet fuel which has improved financial performance, at least for the time being.

10. ‘Ethical’ supply chains on the Board Room agenda

Last but certainly not least is the issue of ethical supply chains, which will increasingly force itself onto the boardroom agenda in the coming year. There is far more awareness and interest now amongst Western consumers about the conditions in which the goods they purchase are manufactured. Not least in order to minimise damage to their brands, global manufacturers and retailers will need to probe deeper into their own supply chains in order to root out unethical practices, either societal or environmental. Although this will create an additional layer of costs, the benefits will be far-reaching, as it will create more resilient and – in the long term – more profitable supply chains.